Images from the ISS

Last year I became a licensed amateur radio operator, first getting my Technician license and ultimately getting my General class license a month or so later. While I was a Technician class operator with limited privileges on the HF bands, I sought out things to do with my full rights on VHF and UHF frequencies.

Turns out, there are quite a few satellites in Low Earth Orbit that are usable by ham radio operators to communicate with one another over long distances. They're basically signal repeaters in the sky. Anyway, this post is not about those satellites, it's about the International Space Station (ISS). The ISS has similar capabilities to the amateur satellites I mentioned - you can even talk to the crew sometimes! One other thing the ISS can do is send images receivable by anyone with a handheld radio or RTL-SDR.

The ISS crew sends these images on a VHF frequency (145.800 MHz) using a mode called Slow-Scan Television (SSTV). It's essentially images over radio and it sounds like this. Typically the images are sent by the ISS crew to commemorate specific events and the broadcast times are announced in advance.

As I mentioned, there are many ways of receiving and decoding the SSTV signal from the ISS, but you'll need 4 basic things:

I have an antenna specifically designed for working Low-Earth Orbit satellites called an Arrow Antenna, but I've been told that more basic antenna work fine. I connected that antenna to my handheld transceiver (Yaesu FT-60R) and opened the Robot36 app on my phone. I then made sure the phone was close to the radio and turned the volume up. Since I was using a highly directional antenna, I used the ISS Detector app to help me point it correctly at the sky. The Robot36 app began decoding once it heard the start of the image signal, ultimately producing this 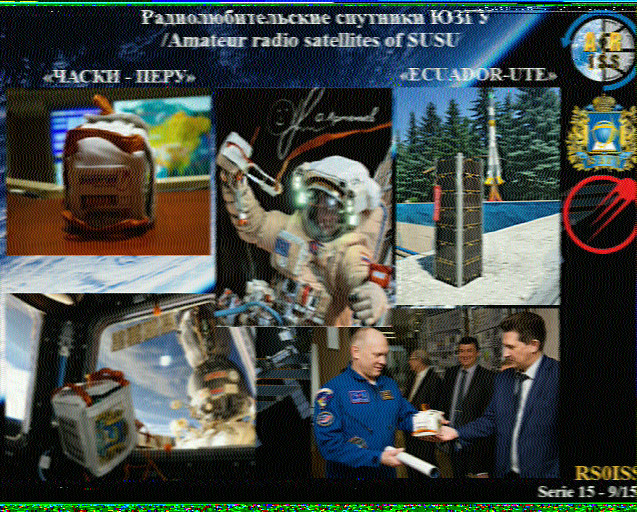 which I saved off from my phone and cropped it a bit. Not bad for an image from space!